I feel like tonight I should be writing about all that I am thankful for, but I just don’t have light, airy, and deep in me tonight. It all fell apart this year, in an almost unreal manner, in an almost unreal time frame. Dad got sick, the fridge died, the central air died, Jenn passed away suddenly, Dad got sicker, Grandmom passed away; Dad got even sicker. I spent most of this year trying to figure out who and what to be most worried about. Many tears were shed; there were plenty of sleepless nights.

I am not light and airy this year. I’m weary and I’m heavy with anxiety. I’m not even sure where to start, but I fear becoming unhappy and ungrateful. My blessings are many even when I’m feeling lost and at loose ends.

I am fall on my knees grateful that Dear Old Dad is doing well and is still with us, there were days I was sure this would not come to pass.

I am fall on my knees grateful for my continued healing and good health. As far as I know I am still cancer-free. My next scans are scheduled for January.

I remain deeply and truly thankful for my husband, who has been by my side from the beginning, through the good, the bad, the terrifying, and the sorrowful. He is my unwavering supporter and my soul mate; even in the darkest hour my heart will always know his.

I’m grateful that this Thanksgiving I have a table to be around with a big extended family. I despise the holidays and all the commercial nonsense and noise that surrounds them but I do so love to sit around big tables surrounded by those I love, cherish, admire, and respect. I’m thankful I’ve never spent a Thanksgiving or Christmas alone or away from home and those I love most. 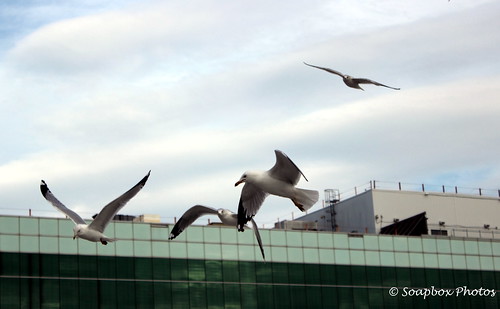 Six years ago we bought a bird feeder to put in our backyard for our new kittens to watch out the window. As it turns out the feeder was good for me too, I fell in love with our backyard birds and honed my photography skills at the same time. Now, six years later my husband and I have both fallen in love with birding and go to places like the Cape May Bird Observatory and the Edwin B. Forsythe National Wildlife Refuge to see more and different birds. I’ve always loved the ocean and the beach but I never knew I loved the great outdoors and nature until we bought that bird feeder for our kittens. The ocean always brought me great peace and now the great outdoors brings me great joy. 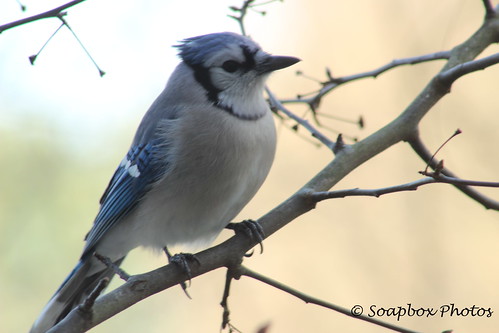 One of the Blue Jays that frequent our backyard, most likely because they love the peanuts we put out

I’m healthier and happier (we both are) for having fallen in love with birds and my strictly indoor cats are entertained. It’s really a win-win situation. 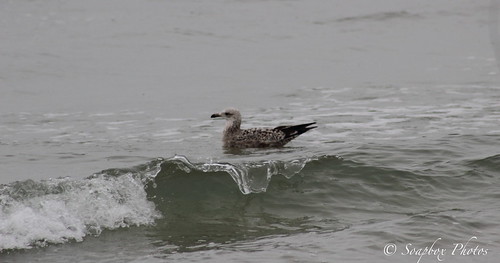 Because I’ve fallen in love with birds and birding I subscribed to the Jersey Birders e-mail list and a few Facebook groups. Lately I’ve noticed a few people writing about how many birds they’ve seen and identified this year so I decided to sit down and tally up how many different birds I’ve spotted and identified so far this year. 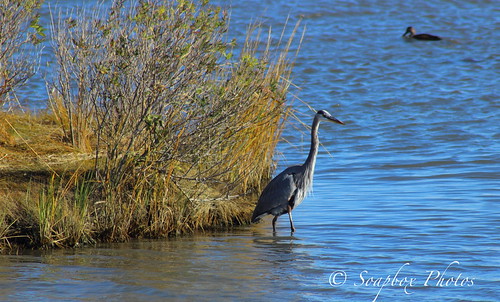 Great Blue Heron at "the brig"

So far this year I’ve seen and identified 35 different species of birds; 16 of those were first sightings for us, 15 of which took place just this summer and fall; two more (laughing gulls and herring gulls) we’d seen many times before but had only ever identified as “Sea Gulls.” Of the 35 different species of birds I’ve been fortunate enough to see this year I’ve been even more fortunate to photograph 32 of the 35, having only missed the wild turkeys, the Downy Woodpecker, and the Red-tailed Hawk that I was too afraid to photograph lest it eat the squirrel in my back yard. I know, I know, that’s nature and the circle of life but I’d have still felt terrible if the poor squirrel got eaten. 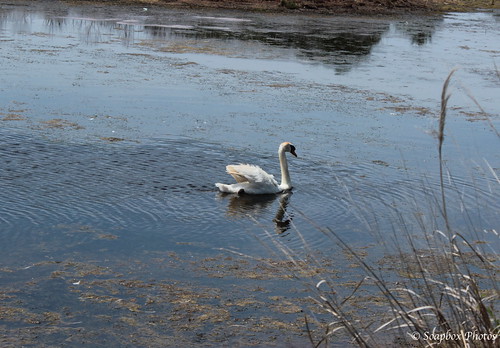 Mute Swan at the Cape May Bird Observatory, as beautiful as these birds are they are actually an invasive species

I’ve set a goal to see and photograph two more species of birds before 2014 ends, a Bald Eagle and the wild turkeys that I kept missing when they were down the road. When the turkeys stopped showing up down the road I was sure I would not have another opportunity to see more turkeys but then one of the birders on the Jersey Birders list, Howard, shared one of his beautiful photo studies of his trips to the Edwin B. Forsythe National Wildlife Refuge and lo and behold there they were, turkeys along Jenn’s Trail. Each week his studies showed the turkeys on Jenn’s Trail so now I have hope to finally get a shot of wild turkeys.

Bald Eagles have been spotted at Forsythe, which is colloquially known at “the brig,” and I hope to spot one there as well but we’ve been tossing around the idea of driving down to Maryland to visit the Connowingo Dam, where Bald Eagles have also been known to frequent. 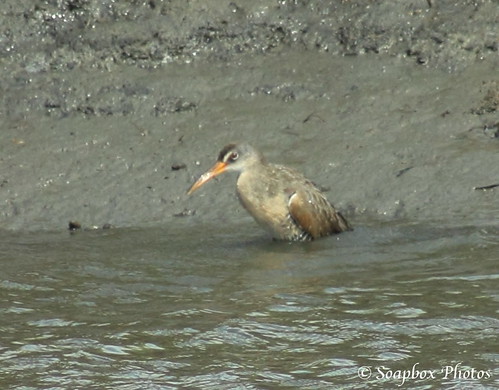 Clapper Rail at "the brig"

To wrap up, in 2014 we expanded our birding horizons to include “the brig” but have only had one visit to Cape May this year and I’ve all but totally stopped watching, journaling, or photographing our backyard birds. So I’m setting a goal for 2015 to get back to capturing our beautiful backyard birds and to taking walks in the neighborhood to see and photograph more local songbirds in addition to expanding our birding horizons to see more new birds as well. It’s November 18th so I’d like to hope that by November 18th of 2015 we will have seen and identified 70 different species of birds, but I’ll be happy with even one or two more. And if I’m being really greedy or ambitious or pipe dreaming I wouldn’t mind seeing a Snowy Owl or two this winter. Happy birding! 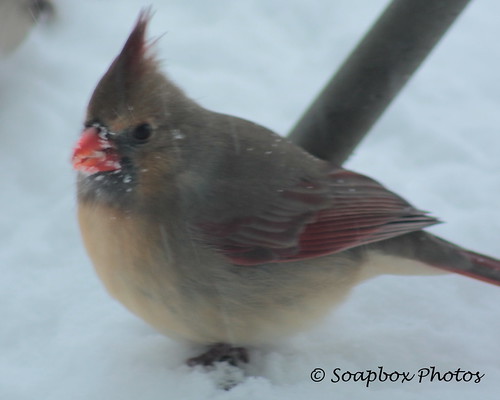 Birds I’ve Seen and Identified So Far This Year 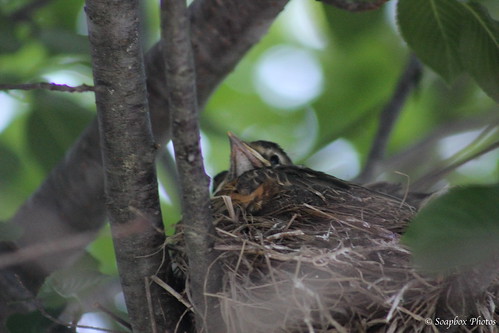 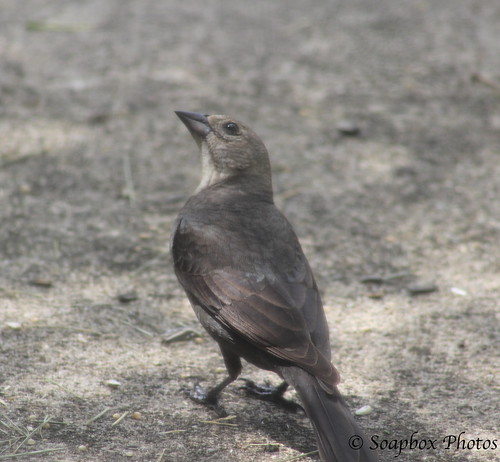 A female Brown-headed Cowbird hanging out in our backyard 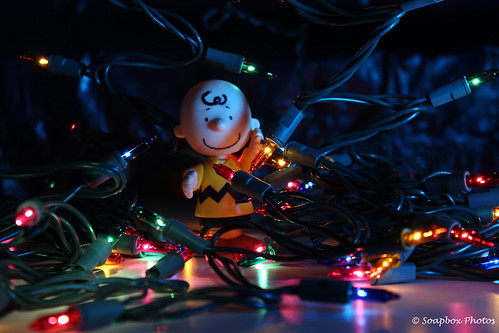 Tonight I’m taking a break from the nature photos to share a photography assignment from earlier this year. In looking through all of my photos recent nature photos my mind wandered to the light and how I should be working with it.

Tonight’s photo is both homework assignment and part of the yearlong One Object Photo project I read about on The Photoblographer.

Charlie Brown Tangled in Lights (strobe lights) was a great idea offered by a friend that never really panned out. I like the light in this photo so I kept it but the original concept was Chuck at the Disco with me capturing the strobe lights in my photos but I could never make that happen. I’m not sure if you need a fog machine to somehow make the strobes visible but working with extremely short and extremely long exposures and everything in between I never did capture the strobe lights in the manner in which I envisioned this series of photos. Like I said, I like the light in this photo so it made this cut.

The first snow of the season fell this evening. The snow only stuck to grassy surfaces but our little fir tree’s branches were covered with a more icy precipitation. 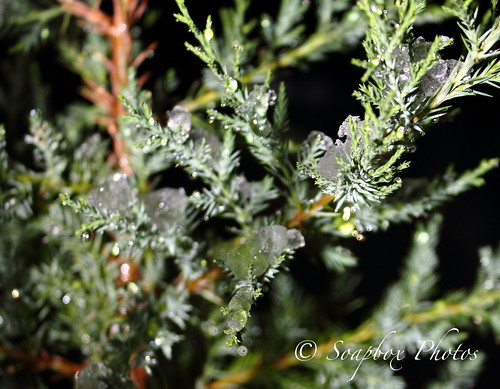 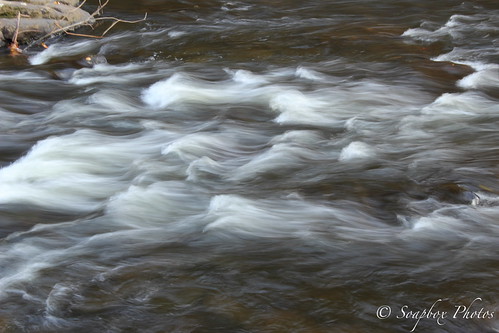