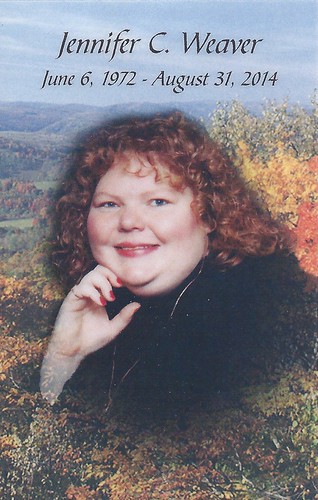 Even when Jenn’s husband called me and I heard his voice on the other end of the phone I still believed he would tell me that Jenn had finally gone to the ER that they’d kept her. I heard him say the words, “Jenn died” and in the time it took to say those two words my world changed. I hung up the phone and went to pieces.

We spoke on an almost daily basis. Jenn was my breaking news friend; fires, floods, mass shootings, big storms, you name it; if it was breaking news she called. We’d discuss the incident and witness it together. The bad stuff doesn’t seem as bad or as frightening when you’ve got a familiar and friendly voice on the other end of the phone.

I still can’t believe I’m never going to hear Jenn’s voice again. I can’t believe she’s gone. We went to Jenn’s farewell ceremony last night and I couldn’t bring myself to touch the urn as we made our final pass and said our final goodbye. I can’t tell you why, but I just couldn’t.

I don’t know to feel. I had a big cry when I got off the phone with Jenn’s husband and I’ve had moments when I’ve filled up, but I’m oddly calm. That afternoon I called a friend to inform her that Jenn had died and we cried together and then that night I still had to go get dinner and then grocery shop. I called another friend to let her knew that Jenn had passed. I spoke to another friend the next morning and I did not cry along with her. I don’t know why.

I filled up in the car on the way home last night thinking how I’ll never hear Jenn’s voice again but I haven’t had that one big breakdown save for when I first found out. I always tell people that no one should tell them how to grieve and that they have to grieve in their own way and in their own time and yet I find myself thinking, “You’re doing it wrong. Why aren’t you more upset? Why aren’t you falling apart? What’s wrong with you?”

I’m sad and I definitely suffered from horrible anxiety all day yesterday desperately not wanting to go to Jenn’s farewell service wondering if I could live with myself if I did not at least make an appearance. I’m glad I did go. I didn’t sleep for the first four days after I learned Jenn died. I finally came home and took something to help me sleep and I got the first solid four hours of sleep I’ve had since Sunday.

So here I am, awake in the early morning and feeling more rested than I’ve been in the last five days, wondering, “Where do I go from here?” Jenn’s gone, our goodbyes have been said, and now all that is left is life without Jenn. I don’t know how to feel. I don’t know how to act. I’m grateful that she’s no longer in pain, I’m grateful she’s no longer suffering, but I hate that she’s no longer part of my daily life. Who’s going to call me when there’s breaking news? Why am I not more upset? I don’t understand. What’s wrong with me? My heart is broken. Is the epic meltdown to come? Could it be that some people never have epic meltdowns?

I’ve fiercely told anyone I’ve ever known who was grieving that there is no one way to grieve and that they shouldn’t allow anyone to place a timeline on their grieving or tell them how to grieve, but yet I can’t help thinking that I am doing it wrong. Is there a wrong way to grieve? Where do I go from here?